A detailed analysis of the above work. 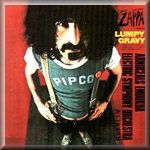 The index numbers were added for the CD release. The original LP featured only two tracks: 1. Side One and 2. Side Two.

A mish-mash of random musical tidbits interspersed with incomprehensible gibberish?

A masterpiece of stupendous proportions, carefully edited, saturated with some of the most important musical motifs in FZ's canon?

This cute little ditty (sped up) starts things off:

Then one of the finest FZ melodies of all time:

End of melody to fade

Note this cool new ascending phrase which leads into a fade:

...And in your dreams you can see yourself...

A bass clarinet, two chords on the piano to

Sped up with scratches and drop outs! Fades into

Compare this music to the MC on We're Only In It For The Money: "Nasal Retentive Calliope Music."

More MC. The Chinese reference is to the Pentatonic Scale, the primary scale in traditional Chinese music. This is one bar of the "Chinese" music:

You can better picture this scale by transposing that up one whole step to:

If you have a piano you can see the first three notes are all on the black keys. Continue up the black plays, playing a Bb, a Db, and finish with the octave Eb. You have learned the Pentatonic Scale!

Snorks, sped-up coughs, and a beautiful celesta serve as a transition to

06:41 I keep switching girls all the time

Substitute "tempos" for "girls" -- This is our theory of Frank Zappa Tempos.

in 5. Listen to the keyboard (electric piano? harpsichord?) in the last three bars!

This is a much longer section than the short 4-bar snippet above, played by the full orchestra. Magnificent writing, horribly recorded...a fermata over a tutti C# Minor chord moves up to an E Minor chord, leading to

Another sharp edit, of course! Who's playing harp?

The onslaught of this imaginative section rushes forward -- only to be typically cut off by three AMAZING sounds: a snork (had to be Dick Barber, right? Supreme Snorker?), another sort of softer nasal snork, followed by a perfect cough. You may laugh, but these 19 seconds of manipulated sound truly exemplify FZ's incredible MC technique -- listen to it with a mind towards understanding how a composer moves from one section to another, creating transitory continuity...here, the fast drums and piano set you up for the three sounds -- seemingly SO much slower than the previous music -- and THOSE three sounds set up

An ominous vaguely pedestrian beat, with a bass flute and squealing Eb clarinet which sets up a Varèse "homage" in the French Horns. At one time, we believed that this was a direct quote from something, but unless we missed it, we now believe that this is completely original music, certainly with a tip of the repeated-note idea to Intégrales...then the bass flute plays an interesting little line with background squealing...

A harmonic movement up to A Major leads to

Very fast sped-up music leading to a short MC section which leads to a drum riff -- woodwinds, brass and percussion in some more vaguely Varèse-type exclamations -- fantastic writing! Bass flute is again prominent. A quick brass lick is followed by three drum beats and this little gem (piccolo and oboe):

Piano and very difficult French Horn solo over shifting chords -- and finally a wicked flute lick over a very dissonant chord ends Side One...

The "dialogue" is now fully and organically integrated into the MC and orchestral transitions -- notice these first ten seconds, for example -- the manipulated sound: Ba-ba ba-dyg, followed by ah, there it went again; and then a yee followed by I hear you've been having trouble (delivered in the same strange monotone as the opening line on Side One)...

...don't I get any...just the opposite...you don't get any...that's very distraughtening...this is all blended with a strange knocking sound and two clavinet-type electric keyboards. A few squeaky MC notes lead to two awesome "tutti" downbeats, the first one instrumental and the second vocal, sort of a combination of rent and hent!

Everything in the universeThe piano pedal is depressed. Two very soft notes (A-F#) are played after the words atoms are really vibrations you know and then reversed (F#-A) after The Big Note. After right! segue to

put a motor in yourself (this line is fully developed 25 years later as a separate track of this release's grandchild, Civilization Phaze III: "Put A Motor In Yourself.")

Starts with wind and French horn choir singing out some beautifully dissonant chords, then taken over by the strings in an even more dissonant section.

This interesting section is sped up from a deep slow bass voice, giving it a "normal speed" feel. A single snork segues to

I think I can explain

This should be interesting...vicious circle -- you got it!

This dissonant lick is repeated many times:

A wonderful timpani/drums section, quickly augmented by French Horn, bass, piano. Drums are too noisy and you got no corners to hide in. Larry develops this statement 25 years later in Civilization Phaze III: "They Made Me Eat It." A few seconds of sped-up orchestral music leads to

Notice the pedal-depressed panchromatic resonance! If it's still alive segues to

Another gorgeous orchestral section! Oboe floats over steady pulses, with snapping pizzicato on the 12th beat and then every 10th beat thereafter until we reach a beautiful wind chorale section, identical to 04:25 above. A loud knock leads to

French Horns and low grumbling brass are joined by stark vibes and then a drum kit starts a rhythmic pattern, over which FZ has composed some truly stunning music, giving tantalizing tastes of future orchestral efforts. The rhythm suddenly stops for a quick piano/vibes duet; the orchestra re-enters with the flute belting out a three-note pattern; and the drum kit brings back the rhythmic pattern for a few seconds only to stop again! A few more orchestral outbursts, and again the drum kit returns with piano accompaniment. Again it stops, for a beautiful and lengthy section featuring solo violin. Eventually, the bass flute plays a jazzy lick over a sustained wind chord. Segue to

'cause round things are boring (Calvin)

The pedal-depressed resonance is supplemented by some knocking and the plucking of a low bass string, followed by a soft ahh and the sound of exhaling. Watson's analysis of all this (page 96) is pretty interesting! Segue to

"Take Your Clothes Off When You Dance"

Round things may be boring, but FZ makes certain that this particular circle is perfectly connected! This D Major ditty is so organically related to the opening G Minor section that one cannot help but imagine -- Finnegans Wake-style -- that one can turn the record over and listen to the boring round thing again! (D Major is the V, or dominant, of G Minor -- and therefore, a perfect choice of key for an immediate return to the opening G Minor key!)

Unknown said…
Great job! Precise analysis and well made.
May I ask you where did you find the score? I am studying Zappa's Lumpy Gravy and I haven't found sheets, transcriptions or something else about this album. May you help me? Thank you very much. Giada
December 12, 2015 at 11:14 AM

Lewis Saul said…
Giada: [one year after your comment] =